Discover Leslie Day's Field Guides To the Natural World of New York City.
To order, click on the image or ask your favorite bookseller. 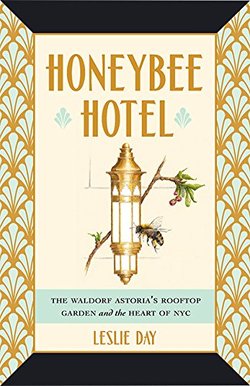 "Honeybee Hotel is a fascinating and heartwarming story of how nature checked into one of New York's most fabled hotels, and everybody was the better for it. Nobody knows the natural world of the city like Leslie Day."
(Kevin Baker, author of America the Ingenious: How a Nation of Dreamers, Immigrants, and Tinkerers Changed the World)

"Like a bee buzzing from flower to flower, Honeybee Hotel takes the reader on a journey from New York City's most storied hotel to a homeless shelter to the inside of a single honeycomb chamber to the ingredients of a Waldorf salad. The through line, of course, is honey. And this beautifully written book is as sweet and delicious as its subject."
(Suzi Siegel, author of Tiny New York: The Smallest Things in the Biggest City)

The tale of Honeybee Hotel begins over one hundred years ago, with the Astor family and the birth of the iconic Manhattan landmark, the magnificent Waldorf Astoria. In those early days the posh art deco masterpiece had its own rooftop garden for guests to enjoy. Fast-forward to the turn of the twenty-first century, and we meet executive chef David Garcelon, the creative genius behind the idea of restoring the celebrated rooftop garden. His vision included six hives containing some 300,000 honeybees, which would provide a unique flavor for his restaurant’s culinary masterpieces. Yet Garcelon’s dream was much grander than simply creating a private chefs’ garden: he wanted the honeybee garden to serve as a bond among people. Soon the staff of the hotel, the guests, local horticulturists, and beekeeping experts formed a community around the bees and the garden, which not only raised vegetables, herbs, and honey to be served in the hotel but also provided healthy food to the homeless shelter across the street at St. Bartholomew’s Church.
Through her meticulous research and interviews with culinary glitterati, entomologists, horticulturists, and urban beekeepers, Leslie Day leads us on a unique insider’s tour of this little-known aspect of the natural world of New York City. She familiarizes us with the history of the architectural and cultural gem that is the Waldorf and introduces us to the lives of Chef Garcelon and New York City’s master beekeeper, Andrew Coté.
Day, an urban naturalist and incurable New Yorker, tells us of the garden’s development, shares delectable honey-based recipes from the hotel’s chefs and mixologist, and relates the fate of the hotel in the wake of the Waldorf’s change of ownership. During our journey, we learn quite a bit about apiaries, as well as insect and flower biology, through the lives of the bees that travel freely around the city in search of nectar, pollen, and resin. This absorbing narrative unwraps the heart within the glamour of one of the world’s most beloved cities, while assuring us that nature can thrive in the ultimate urban environment when its denizens care enough to foster that connection.